‘I was born with a feel for music,’ says Manuel Perea, ‘a good sonidero has it in his blood. My great grandparents were instrumental musicians. My grandfather, who was born in 1903, was a famous violinist while he was still a teenager, well before records even arrived in Mexico. My musical heritage is what drove me to be a sonidero for the past 57 years.’

‘A sonidero is far more than just a DJ. He has to be an entertainer, but above all he must be respectful and sensitive to the crowd.’

The sonidero tradition in Mexico started in 1940 in the form of street parties with loud, highly danceable music played by a DJ on rudimentary soundsystems featuring big, horn shaped speakers, a turntable and a simple microphone. Its heyday was in the 70s and 80s with the introduction of Colombian music, notably cumbia, to the working class area near the airport where Manuel was born and raised, Peñon de los Baños. Cumbia, often described as ‘la música del barrio,’ is as emblematic of Mexico as the agave plant and the Mezcal drink sipped in every street corner bar. For Manuel a sonidero is far more than just a DJ. ‘He has to be an entertainer, charismatic, but above all respectful and sensitive to the crowd,’ he explains. ‘If the public don’t like the music they will stop dancing and you are finished.’

‘Nowadays a sonidero who doesn’t give shout-outs is a nobody and I have had to adapt. If the public doesn’t like the music then they will stop dancing and you are finished.’

Saludos or shout-outs are key to a successful gig. The sonidero must call out a personal welcome to individuals and respond to requests passed through the crowd on pieces of paper. Sometimes they are recorded and sent to relatives abroad or burned on to CDs by promoters and sold so people can send the music and the shout-outs by mail. 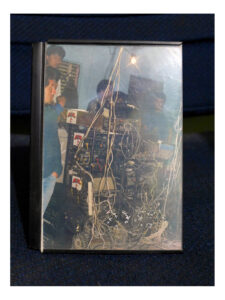 Manuel remembers the time before shout-outs with nostalgia. ‘Shout-outs first became very popular in the 70s. They would begin as soon as the tune started. Before that, the tunes were played clean without any interruptions. In those days I would only start to speak or shout out to such and such family at the end of the record or track. Nowadays a sonidero who doesn’t give shout-outs is a nobody and I have had to adapt. Even though I am called ‘Abuelito’ (grandfather) they call me the ‘King of Shout-outs’ and I greet everyone. I’m always very attentive and friendly when the public call out, ‘Abuelito, put this one on, can you do a shout out?’ I always reply, ‘coming up!’ 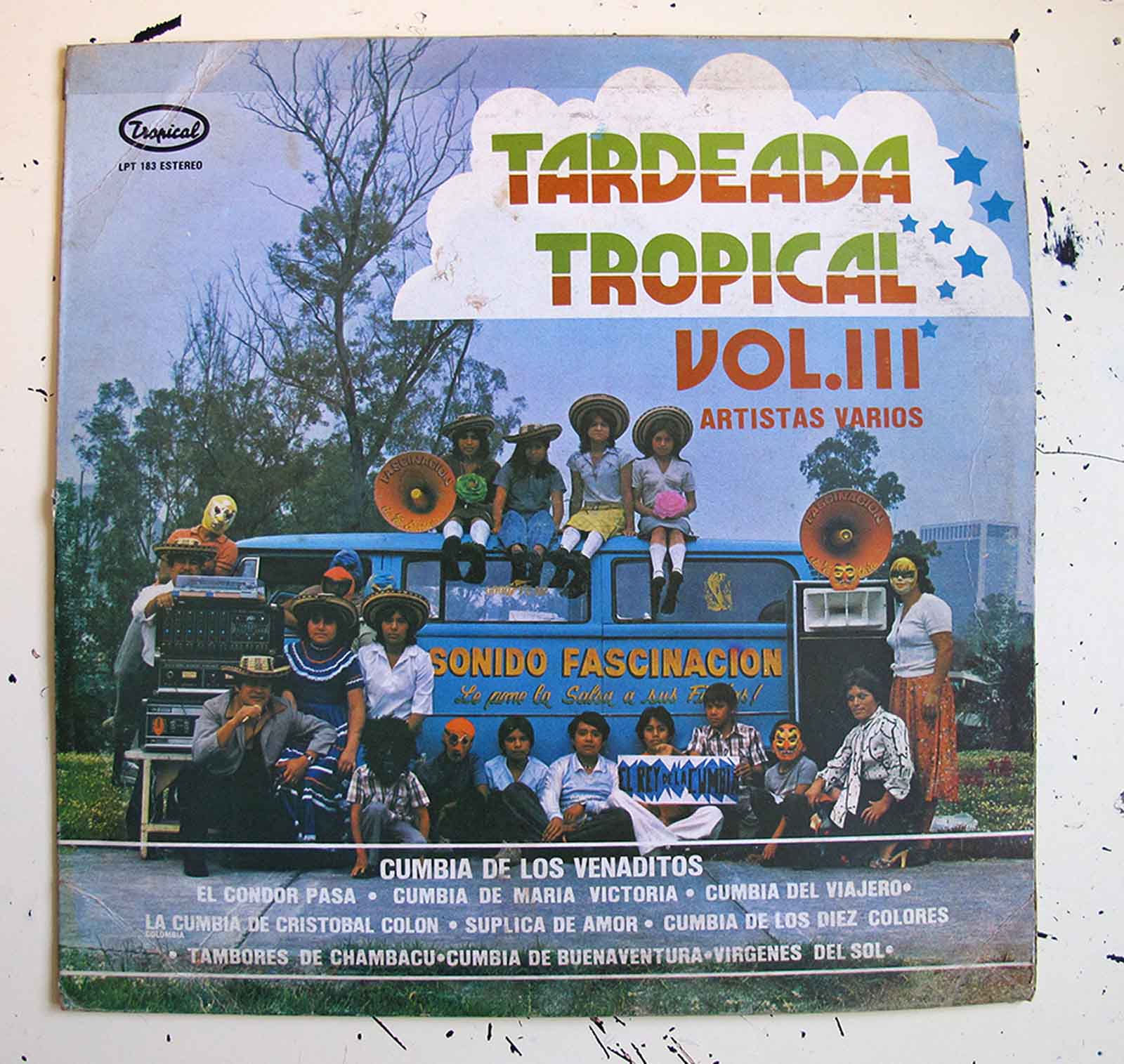 Branding has become essential. Many sonideros have a posse of assistants with logos on their uniforms and equipment in the typical graffiti-style sonidero font.

Manuel was quick to brand his sound as Sonido Fascinación, a trend that was soon adopted by many others. ‘We were the first sonido “baptized” in Mexico. ‘Sonido’ has had more punch and, greater success because the label ‘Fascinación’ was added,’ he says. ‘In 1970 there were more than 200,000 soundsystems circulating in Mexico City and the State of Mexico but when I added the name ‘Fascinación’ a lot of people criticised me. What’s up with that Manuel, what do you mean ‘Sonido Fascinación? Leave it out! But within eight days there were 10 or 15 sonideros with new names, that’s how quickly things moved.’ Today the branding has become essential. Many sonideros have colourful branded trailer trucks and a posse of assistants with logos on their uniforms and equipment in the typical graffiti-style sonideros font.

‘At first I refused to sell my music – how could I sell the records if I only had one copy? Then I said to myself, ‘Wake up Manuel.’

His record store Discos Colombia Chiquita, which opened in 1964 in Peñon de los Baños, is described by collectors as the ‘holy grail’ for Latin vinyl hunters. It has one room with a low ceiling and a hand-painted sign and is crammed with cumbia, salsa and rumba records. The move to open a record shop was prompted by demand from partygoers for copies of records they had heard at Manuel’s gigs. ‘At first I refused to sell my music – how could I sell the records if I only had one copy?’ he remembers. ‘I said to myself, wake up Manuel! Then I began to develop the idea of Manuel Perea Sonido Fascinación, the King of Cumbia. I had built up a large collection of records for all kinds of occasions including dances, weddings and ‘quinciñeras’ (girls’ 15th coming of age parties) but customers began to ask for more. ‘Don’t you have anything romantic, jazz, instrumental or ‘chilenas?’ So I began to stock a wider variety of music.’ He started to listen to the music of other sonideros and soon realized that they were playing hits from Venezuela, Peru, the USA and Puerto Rico. It was clearly time to go further afield for material.

‘My name was Fascinación and I wasn’t fascinating so I travelled for 16 years visiting nearly 100 cities hunting for vinyl.’

‘My name was Fascinación and I wasn’t fascinating!’ he admits. ‘So I got my act together and from the late 70s I travelled for 16 years visiting nearly 100 cities. He stayed in modest but comfortable places and got to know the gastronomy, the culture, the authors and artists. But above all the purpose was to buy music for his gigs and his shop. ‘I spent a lot of my time in Colombia where you can find music from everywhere in South America and further afield. Colombia will always be the first choice source for sonideros but the Colombians also love our music and the trade goes both ways. Today there is something for all tastes, from Cuban and Puerto Rican ballads to New York salsa to South American music of all genres.’

Discos Colombia Chiquita is described by collectors as the ‘holy grail’ for Latin vinyl hunters. Carefully selected images, record sleeves and Colombian iconography adorn every surface, the brighter the better.

Today the shop groans under the weight of its records. Seemingly endless racks of hand-picked gems await their new owners, ready once again to be taken out to fulfil their purpose on the dance-floor. Every inch of wall and ceiling space is occupied. Carefully selected images, record sleeves and Colombian iconography adorn every surface, the brighter the better. Coloured records hang from the ceiling alongside masks and Colombian hats worn by the campesinos and Villenato musicians alike. Vintage Garrard 4HF turntables are proudly on display, customised by Manuel with images of Colombian flags or famous record sleeves. Historically, a firm favourite of Jamaican sound systems selectors, the turntables were revered by all for their stability, durability and sound quality. The chosen records from the racks are played for you by the man himself at ear-piercing volumes, whilst his nephew Frank and daughter Maria are on hand to guide and fulfil your record wish list. 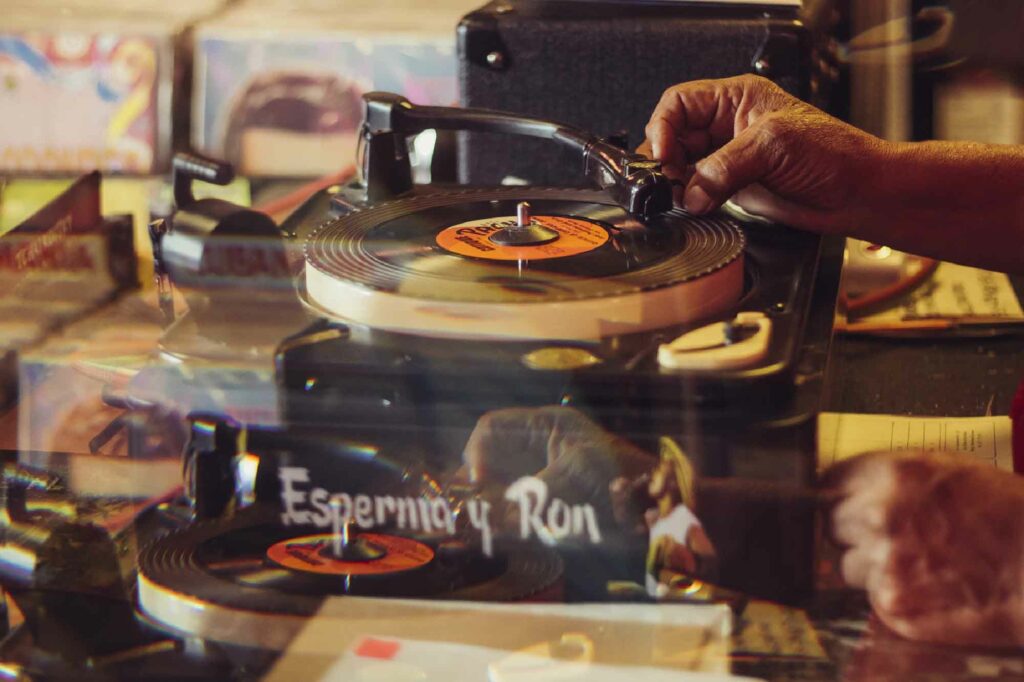 ‘The first cumbias were heard here and the crowds loved the different rhythm. They enjoyed the Mexican cumbia style just as much as the original music from Colombia.’

‘People often ask me why we opened our store in Peñon,’ Manuel grins. ‘It’s not exactly a tourist area, but this is where I was born seventy-seven years ago. This place has a lot of sentimental meaning and value for me. It was here that my mother first held me in her arms, in this exact corner. I am a Peñon de los Baños local.’ 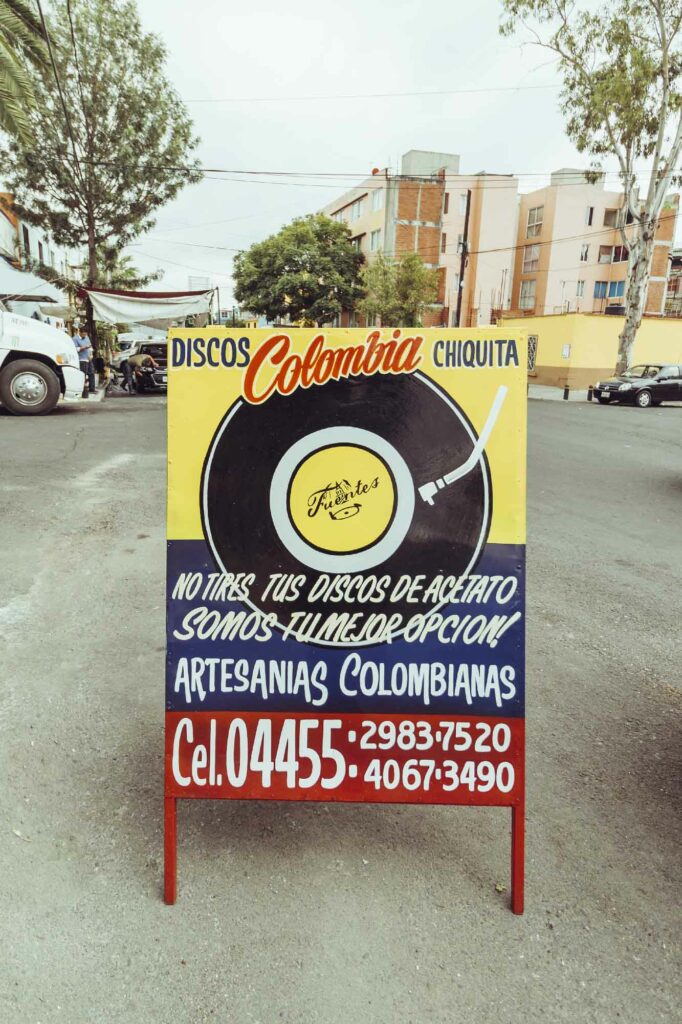 Peñon people had always loved music and dancing and there were some very good local sound systems in the neighbourhood, he remembers. ‘The first cumbias were heard here and the crowds loved the different rhythm. They really enjoyed the Mexican cumbia style just as much as the original music from Colombia.

The Perea dynasty doesn’t end with Manuel. Five of his eight children are sonideros, including his daughter Maria. The rhythms and the magic still keep the concept of sonidero alive in today’s parties and weddings.

The sonidero tradition is familial and multi-generational. Sons, daughters, nieces and nephews are often drafted into the family sound system before they’re old enough to work. Manuel’s family is no exception. The Perea dynasty doesn’t end with Manuel. Five of his eight children are sonideros, including his daughter Maria. Five of his nephews are sonideros. Manuel’s son, Manuel Junior now takes Sonido Fascinación on tour across Mexico and the United States.

‘The rhythms and the magic still keep the concept of sonidero alive in today’s parties and weddings,’ says Manuel. ‘Cha cha cha, mambo, danzón and swing are the rhythms that made it an era. ‘Fascinación’ wasn’t the first sonidero but it was one of the first in Mexico, and the first baptized sonidero. As the oldest sonidero in Mexico with the most experience, we continue to live every day as it comes.’

Music producer and DJ, Carlos Mayoral “Pocz”, has been frequenting Colombia Chiquita ever since he moved from Caracas to Mexico City, finding some of his favourite 7 inches within their walls. Carlos kindly compiled this vinyl mix which he feels best sums up the essence of Colombia Chiquita.

This article was written by independent journalist and editor Pamela Merritt. The photos of Colombia Chiquita were taken by David Barajas. A special thanks to Mirjam Wirz for supplying archival photos.

Any cookies that may not be particularly necessary for the website to function and is used specifically to collect user personal data via analytics, ads, other embedded contents are termed as non-necessary cookies. It is mandatory to procure user consent prior to running these cookies on your website.